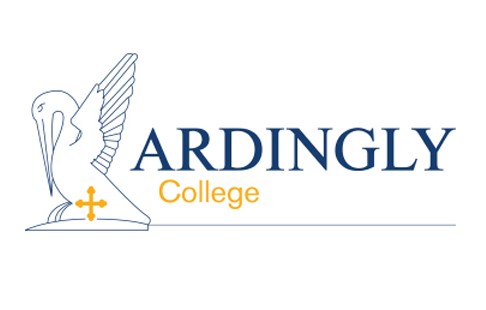 Ardingly College is a selective co-educational boarding and day independent school near Ardingly, West Sussex, England. The school is a member of the Headmasters' and Headmistresses' Conference and of the Woodard Corporation of independent schools and as such has a strong Anglo-Catholic tradition. It was originally a boarding school for boys, and became fully co-educational in 1982. As of 2017, there are about 416 pupils enrolled at the school, aged between 13 and 18. Additionally, there are about 520 pupils aged from 2½ to 13 at the Ardingly College Preparatory school, whom it shares some common grounds with.

The school is regularly positioned amongst the top  International Baccalaureate (IB) schools in the United Kingdom, and has won the Royal Society of Chemistry Top of the Bench Competition.
Ardingly College was founded as "St Saviour’s College", Shoreham, in 1858 by Canon Nathaniel Woodard whose aim was to provide education firmly grounded in the Christian faith.

St Saviour’s College opened on 12 April 1858, occupying the New Shoreham buildings in the lee of the churchyard of St Mary de Haura which had been vacated by another Woodard School, Lancing College, when it moved to its permanent home in April 1858. The site at Shoreham however was never intended to be permanent and it was left to Woodard to scour the South of England for a suitable permanent location for St Saviour’s School.

In 1861 Woodard came across the 196 acre (0.79 km²) Saucelands estate at the southern edge of Ardingly village, which was acquired in 1862 for £6,000. Woodard employed Richard Carpenter as the school's architect, and the foundation stone at Ardingly was laid on 12 July 1864 by Granville Leveson-Gower, 2nd Earl Granville. St Saviour’s College moved to the partially completed site at Ardingly on 14 June 1870 when the new school was officially opened by the Bishop of Chichester, with the inaugural sermon delivered by Samuel Wilberforce.

In 1958 the school celebrated its centenary. On 9 June 1958, as part of the celebrations, the Queen and the Duke of Edinburgh visited Ardingly. A stone plaque on the terrace parapet commemorates the visit, where she "beheld the view." Later that week, on 14 June 1958, the then Prime Minister, Harold MacMillan, visited the school to open the Centenary Building, which comprises the college cricket pavilion and upstairs Centenary Room. On 8 May 2008, the Duke of Kent visited Ardingly as part of its sesquicentenary celebrations and officially opened a new teaching block at the pre-preparatory school.